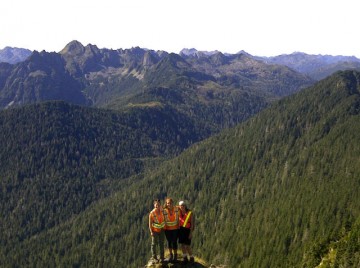 UBC Forestry together with the Haida Gwaii Higher Education Society are taking a new approach to natural resource education with their collaborative, community-based semesters in natural science and socio-economic approaches to natural resource management.

Undergraduate students from all across Canada are experiencing a different kind of education whilst being immersed in the local Haida community.Courses are taught at the Haida Heritage Centre at Kaay Llnagaay near Skidegate, though students learn widely outside the walls of the classroom through the use of experiential and participatory approaches to student learning implemented by passionate instructors, each experts in their fields. Haida Gwaii is Canada’s largest and most remote archipelago lying 50 Km at its closest point to B.C.’s mainland near Prince Rupert. It comprises over 150 islands and boasts breath-taking scenery, magnificent old-growth rainforest and stunningly diverse marine ecosystems. The islands have been called the Canadian Galapagos because they contain a wealth of unique subspecies of plants and animals. Haida Gwaii is also a resource-dependent community and has been at the forefront of environmental stewardship since the blockades on Lyell Island in the 1980’s led to the formation of the Gwaii Haanas Ecological Reserve protecting the southern half of the archipelago from timber harvest to the new joint Land Use Operations Agreement signed between Guu- jaaw, President of the Haida Nation and Gordon Campbell, B.C.’s Premier in 2010.

As Justice Sinclair, Chair of the TRCC, states “It is the education system that has contributed to this problem, but it is education which is going to help us get away from this problem. We need to look at the way we educate our children and ourselves”. UBC together with HGHES are taking an important step in this direction. As part of truth and reconciliation day on September 18 2013 Professor Sue Grayston, who is teaching the first course of the Haida Gwaii fall semester, will be taking this year’s HGSE 355 class to Gwaii Haanas, to Windy Bay (Hlk’yah GaawGa).There we will spend time by the recently raised legacy pole that celebrates 20 years of the Gwaii Haanas Agreement between the Haida Nation and Canada working together to manage the National Park Reserve and Marine Protected Area.